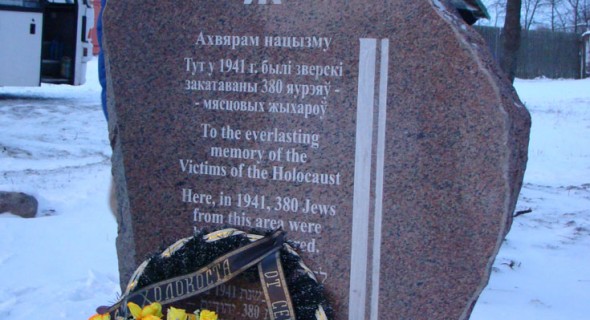 During the latter half of the 19th century, the town profited from its geographical position and in 1897 was noted to have 4871 residents, of which 3377 were Jews. By the start of World War I, it became a large river port which loaded goods (mostly salt and timber) and shipped them down the river to the Baltic Ports. Also the liquor and alcohol industry began to be developed, including the Potocki’s Vodka Distillry (est. 1893).

In the aftermath of the Russian Revolution of 1917, the town changed hands several times, including German and Polish armies during the Russian Civil War and the Polish-Bolshevik War. Finally on June 7, 1920 Berazino became part of the Byelorussian Soviet Socialist Republic. From June 17, 1924 as a separate raion centre in the Barysaw District and in June 1927 – Minsk District. Eventually the town grew, and on 15 February 1938 became part of the Mogilev Province. During that time, mass industrialisation took place, and the position of the river port allowed a development of shipbuilding, wheel, textile and liquor factories, as well as smaller workshops for automobiles and wood fabrics.

During World War II, the city was occupied by Nazi Germany, which completely changed the town’s make-up by killing all Jews, and was liberated by the 2nd Byelorussian Front on 3 July 1944 during operation “Bagration”. In September of that year the town became part of the Berazino District of Minsk Region, and on July 7, 1968 became a city. In 1998  the town occupied an area of 1.9 square kilometres and had a population of 13.3 thousand people.

Read more about this location: Berezino – A Typical Shtetl

Previous Memorial: Baranovichi (or Baranavichy, also in Polish as Baranowicze)