Home > Baranovichi (or Baranavichy, also in Polish as Baranowicze) 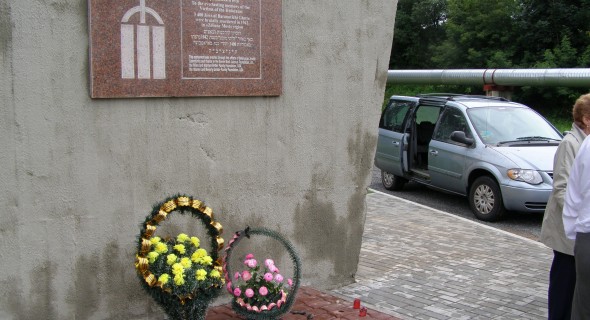 On the eve of the Holocaust, 12,000 Jews lived in Baranovichi. Under Soviet rule (1939–41), Jewish community organizations were disbanded and any kind of political or youth activity was forbidden. Some youth groups organized flight to Vilna, which was then part of Lithuania, and from there reached Palestine. The Hebrew Tarbut school became a Russian institution. A Jewish high school did continue to function, however. In the summer of 1940 Jewish refugees from western Poland who had found refuge in Baranovichi after September 1939 were deported to the Soviet interior. When Germans captured the city on June 27, 1941, 400 Jews were kidnapped, leaving no trace.

A Judenrat was set up, headed by Joshua Izikzon. The community was forced to pay a fine of five kg. of gold, ten kg. of silver, and 1,000,000 rubles. The ghetto was fenced off from the outside on Dec. 12, 1941. The ghetto inhabitants suffered great hardship that winter, although efforts were made to alleviate the hunger. The Jewish doctors and their assistants fought to contain the epidemics. On March 4, 1942, the ghetto was surrounded. In a Selektion carried out by the Nazis to separate the “productive” from the “nonproductive”, over 3,000 elderly persons, widows, orphans, etc., were taken to trenches prepared in advance and murdered. Resistance groups, organized in the ghetto as early as the spring of 1942, collected arms and sabotaged their places of work. Plans for rebellion were laid, but the uprising never came to pass, partly due to German subterfuge.

In the second German Aktion on Sept. 22, 1942, about 3,000 persons were murdered. On Dec. 17, 1942, another Aktion was carried out, in which more than 3,000 persons were killed near Grabowce. Baranovichi was now declared judenrein. At the end of 1942 Jews were already fighting in groups among the partisans. A few survivors from the ghetto were still in some of the forced labor camps in the district, but most of them were liquidated in 1943. On July 8, 1944, when the city was taken by the Soviet forces, about 150 Jews reappeared from hiding in the forests. Later a few score more returned from the U.S.S.R.

Baranovichi (or Baranavichy, also in Polish as Baranowicze)