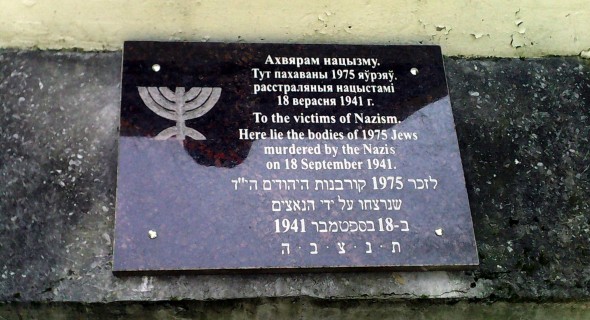 The town’s population was 1,800 (mostly Jewish) people in 166 houses, according to an 1895 Russian Encyclopedia.

The Yiddish Jewish settlement in Krupki is first noted in the 17th century and was thriving by the middle of the 18th century. About 40% of the Jews were employed as laborers and craftsmen and a Yiddish school was established in the town. There were three Hebrew schools in Krupki by the 1890s according to the 1895 Russian Encyclopedia.

About 75% of the local Jews fled the town during the Russian Revolution and subsequent Russian Civil War, for either Western Europe or United States. Only 870 of them remained in situ by 1939.

The town was briefly taken by a small unit of Prussian troops during the later part of the war. Belarus first declared independence on 25 March 1918, forming the Belarusian People’s Republic and later the Communist Party (bolsheviks) of Lithuania and Belorussia took it over in Belarus. As a result, Krupki was incorporated into the Soviet Union after western Belarus and the border city of Brest were given to Poland and the eastern parts, along with the city of Minsk, joined the USSR, between the two World wars.

Nazi Germany invaded the Soviet Union in 1941. On 18 September 1941 the entire Jewish Ghetto, a community of 1,000 people, along with others were killed by the Nazis. The massacre was described in the diary of one of the German perpetrators. The first massacre involved 100 deaths near the graveyard, but a later killing spree killed the rest of the Jews in a different location.

At first, the Germans told the Jews to gather together because they were being deported to Germany. But as the German forced them into a ditch, it was evident what the Germans had in mind. At this point, panic ensued.

Krupki was liberated by the Red Army in June 1944. Belarus was the hardest hit Soviet Republic in the war and remained in Nazi hands until it was liberated in 1944 during the Minsk Offensive. The Jewish population of Belarus was devastated and never recovered.

… Oct. 5th [1941]. In the evening our lieutenant was looking for 15 men with strong nerves. I of course volunteered. We did not know what it was all about. Next morning at five we were to line up in front of the Company office, helmets on, and received 300 cartridges a man. We waited for morning in tense expectations. At exactly 5 a.m. we were ready and the First Lieutenant explained our task to us.

One platoon was assigned to us as a guard. Its function was to see that nobody escaped.

At precisely seven all Jews, men, women and children, had to report at Inspection Square. After reading off the list the whole column moved to the nearest bog. The execution squad, to which I belonged, led the way and an escort marched on either side.

It was a rainy day and the sky one solid leaden cloud.

The Jews had been told that they were all being deported to Germany to work there. But many guessed what was in store for them, especially when we crossed the narrow-gauge line and proceeded to the bog. A panic arose and the guard had a hard job keeping the lot of them together. When we arrived at the bog all were told to sit down, facing in the direction from which they had come. Fifty yards away there was a deep ditch full of water. The first ten were made to stand by that ditch and to strip, down to the waist. Then they had to get into the ditch and we who were to shoot them stood above them on the edge. A lieutenant and sergeant were with us. Ten shots rang out, ten Jews popped off. This continued until all were dispatched. Only a few of them kept their countenances. The children clung to their mothers, wives to their husbands. I won’t forget this spectacle in a hurry…

Source: From the Diary of Senior Private First Class Heydenreich, 12th Company, 354th Infantry Regiment, 62nd Infantry Division, Field P.O. No. 62: What I went through in Russia in From True To Type: A Selection from Letters and Diaries of German Soldiers and Civilians collected on the Soviet-German Front (London, New York, Melbourne and Sydney, [1945]), p. 31. Yad Vashem