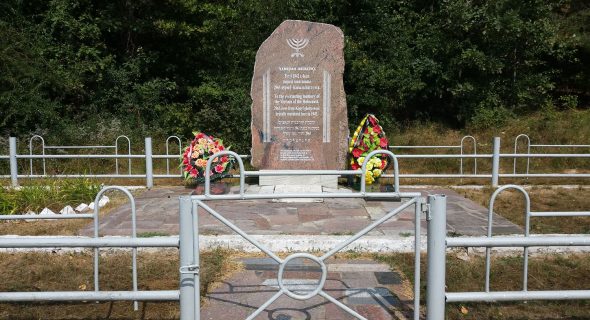 The capital of the Kapyl Raion, Belarus. Kapyl is located 21 miles (34km) northwest of Slutsk, and 56 miles (90km) southwest of Minsk.

The first mention of Jews in Kopyl is from 1720. Jewish institutions that were subsequently established included the Great Synagogue (Groyse Shul), a Tailor’s synagogue, a prayer house, and a number of battei midrash. A cemetery was located by the Great Synagogue.

Fires that broke out in 1845 and 1865 caused extensive damage to the shtetl. Another fire that swept through the town in April 1886 destroyed the Great Synagogue, in addition to hundreds of homes.

Most Jews worked as storekeepers, artisans, and peddlers. Additionally, the “Kopyl veil,” which was produced in the town for brides, became known for its quality.

By the end of the 19th century the majority of the town’s population was Jewish. In 1900 there were 2,671 Jews living in the town (approximately 60% of the total population). After the upheavals caused by the Russian Revolution, World War I, and the worldwide Depression, the Jewish population subsequently declined, as substantial numbers of Jews began emigrating. By the 1930s approximately 1,400 Jews were left in Kapyl (about 28% of the total population).

After the Russian Revolution, when Kapyl came under Soviet rule, a number of Jewish families worked in the kolkhozes, the collective farms established by the Soviet regime.

Among the notable figures from Kapyl was the major Yiddish writer Mendele Moykher Sforim (Sholom Yankev Abramovich, 1836-1917). A Yiddish school named after him functioned until 1938. The literary critic Yaakov Avraham Papema (1840-1919) was also from Kapyl.

Kapyl was occupied by the Germans on June 26, 1941. Shortly thereafter, the town’s Jews, as well as those from the neighboring villages, were concentrated in a ghetto that was located near the synagogue. A Judenrat was established, as well as a Jewish police force. Jews living in the ghetto were subject to the persistent threat of violence, while Jewish women also had to fear rape by the Belarussian police. Jewish men were conscripted to work as forced laborers for the Germans and the Belarussians.

The first aktion took place on March 25, 1942 when approximately 1,200 Jews were rounded up and shot in the synagogue courtyard. The ghetto was liquidated on July 23, 1942; the Jews remaining in the ghetto were shot, and the ghetto itself was set on fire. Only a small number of Jews managed to escape and survive the war. Some of those who escaped fought with the Zhukov partisans.

—From The Museum of the Jewish People at Beit Hafutsot