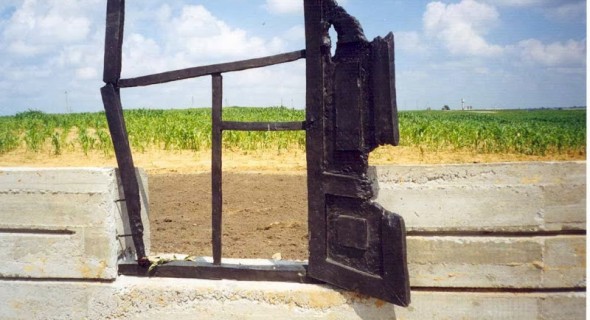 MINSK, Belarus — Jewish leaders, local officials and Western diplomats unveiled a monument Sunday in memory of Jews massacred by the Nazis outside a Belarusian town during World War II.

The monument near Gorodeya, 60 miles from Minsk, has 1,137 stones to honor the number of Jews historians say were killed in a field outside their town on June 17, 1942.

“On this day, the fascists brutally destroyed practically the entire Jewish community. They shot the men and knifed women and children,” said Leonid Levin, president of the Union of Belarusian Jewish Public Organizations and Communities.

“The Jews of Gorodeya shared the fate of dozens of towns and villages destroyed by the fascists in Belarus,” he said. Some 800,000 Jews were killed in Belarus under the Nazis.

Levin also designed the monument, a concrete sculpture of a burned, battered house surrounded by the stones. “The pain of each of the dead rests in these stones,” he said.

U.S. Ambassador George Krol, speaking in Belarusian, said the monument “warns against the repetition of the terrible tragedy” of the Holocaust. The German and French ambassadors also attended the ceremony, along with a Polish diplomat.

The monument’s opening comes amid what Jewish leaders say is rising anti-Semitism in Belarus, a phenomenon they say law enforcement authorities have not done enough to combat.

The local administrative district helped finance the monument’s construction. Its chief, Fyodor Privalov, said authorities “feel responsible for the memory of people who died on our land.”

Most of the financing came from Western donors by way of a Belarusian committee working to preserve the memory of Holocaust victims. Committee chief Yuri Dorn said the group plans to build monuments this year at the sites of three other massacres.

Belarus’ once substantial Jewish community has dwindled to some 28,000.