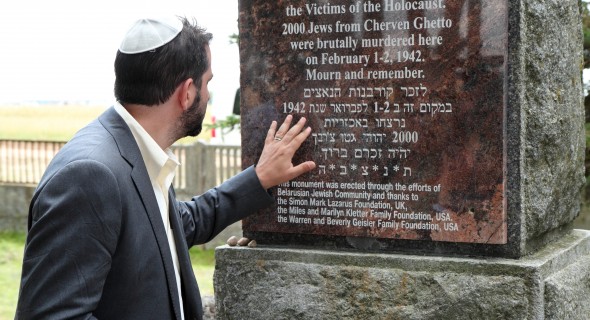 Jews first settled in Cherven (known until 1923 as Igumen) probably in the second half of the eighteenth century. Most of the local Jews worked in commerce and clothing manufacture.

During the Soviet era, the number of Jews declined gradually, and in 1939 the Jewish population numbered 1,491, approximately 23 percent of the total inhabitants. In the 1920s and 1930s, a Yiddish school operated in Cherven. Dozens of local Jewish families earned a living working in agriculture in nearby kolkhozes [collective farms].

The Germans conquered Cherven on July 2, 1941. In the autumn, all the Jews of the town were concentrated along a single street in the Cherven Ghetto with other Jews from the vicinity, as well as refugees from more distant areas. The non-Jewish occupants of the street destined to become the ghetto were transferred to Jewish-owned homes in other parts of Cherven. A few Jews, including patients at the municipal hospital, remained outside the ghetto.

The murders of the Jews in Cherven began during the first days of the occupation, in the summer of 1941, and came to an end on February 1, 1942, when the Jews who had been incarcerated in the ghetto were shot dead.