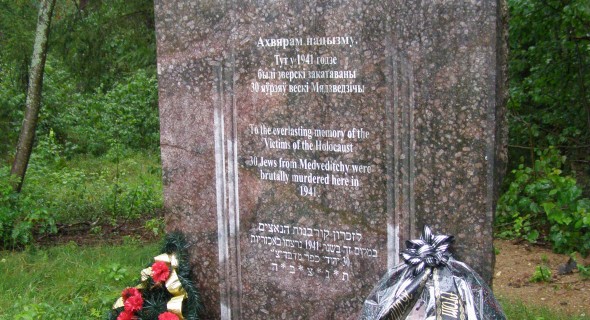 Execution of Jews in Medvedichi

Kind of place before: At the edge of a forest

Stanislav R. evokes: “I was in the field the day of the mass shooting and I was arrested by the Germans. I tried to run away but I was caught for the shootings. So I was taken to dig the pit. At that time, the Jews had already been shot. Other conscripted villagers and I put the bodies in it.” (Witness N°318, interviewed in May, 2011)

Medvedichi is a small village south of Baranovichi city. Before the war, there were around 60 Jews living there. The village was under German occupation from 1941 to 1944.

Holocaust by bullets in figures

The Jews were killed in two phases in August, 1942. First, the men at the edge of a forest. Then their corpses were buried in a pit dug by local people. The other Jews were killed at an unknown place.