The War – this is the most tragic terrible event in the history of the Belarussian people. The subhuman Nazis were systematically killing a peaceful population – woman, children and old people. The losses of Belarus were enormous. Every fourth person in Belarus, some people say even one in three, were killed in the war, fighting in the Red Army, partisan units, underground and/or concentration camps in the occupied territory of Belarus. One out of every three killed was a Jew. This a terrible word “Holocaust”. It means systematically killing the Jewish people by the Nazis and their collaborators in other nations. In Belarus the Holocaust was terrible. 80% of the Jews of Belarus were killed. On Belarussian territory there are about 500 places where the Nazis were killing Jews. At the same time, many Belarussian people were risking their lives saving the Jews. It is worth noting that in Israel people keep the memory of these noble people who are called Righteous of the Nations. Among them about 790 Belarussians, but the actual number who were trying to save the Jews were many more.

On this sunny Sunday, the people of Krichev were welcoming guests – Representatives of the Lazarus Fund, Michael and Diana Lazarus and Cary Kletter and Gilel Klebanov from the USA. Our city was also visited from the representative of the Union of Belarussian Jewish Organizations, Boris Gersten, the coordinator Igor Kraversky, and press secretary Viktoria Demeduk also the President of United Jewish Religious Communities of Belarus, Vladimir Malinkin and the chief Rabbi of Jewish Religious Organizations in Belarus, Mordechai Raichstein. The guests were met by the head of the Krichev local council of deputies Irina Prudnikova, deputy head of Jhana Dmitieva and Local Chief of Ideology Culture and Youth Affairs Vadim Riscoff.

A memorial ceremony was held in Kirchev next to the memorial for victims of Nazism that was put in the park next to the cement factory in memory of the Jews who were murdered there. It is very symbolic that next to this memorial is the memorial that was erected in memory of 18,000 prisoners of war of the Red Army who were murdered by Germans in the same area during WWII because many Jews were fighting in partisan detachments on different fronts, who also lost their lives fighting fascism. Many people who spoke during the ceremony were talking about the importance of preserving the memories of what happened here and who it happened to. During the ceremony there was a moment of silence in memory of the Jews of the Kirchev region who died during WWII.
The chief Rabbi of Jewish Religious Affairs in Belarus, Mordechai Raichstein read the prayer for the deceased [El Molel Rachamim]. The speakers also expressed gratitude to the local authorities for assistance and thanked the Lazarus Foundation who provided sponsorship for the erection of the memorials for Jews murdered by Nazis during WWII.

There was another ceremony in the field next to the village Molyatichi where the monument was erected in memory of the Jews of the Village of Antonovka, who were annihilated and their village was razed to the ground by the Nazis. The Lazarus Foundation group sponsored the erection of 99 memorials in order to keep the memory of the departed alive and this work is continuing.

During the German Fascist occupation of Belarus, over 2,900 villages were destroyed, 628 of them were burned to the ground together with the people who lived in them. 186 of these villages were never rebuilt. The memory of these villages who suffered this same fate is memorialized in the symbolic cemetery of the villages built in place of the destroyed village Hatyn. This was the fate of the village of Antonovka in the Krichev region. On November 14, 1941 the Nazis brutally murdered over 90 Jews who were living in Antonovka. Documents were discovered when the massacre site was excavated that show that 13 people were found in this location, including a child found in its mother’s arms who was buried alive. In addition, the body of a 3 year-old child was found buried alive, which proves the depravity of the Nazi actions.

In 2004 the former principal of the school of Molyatichi Lena Kobazova together with the students of the school erected a memorial sign in memory of the victims of Antonovka. Later at the same location the memorial was built with the sponsorship of the Lazarus Foundation group. At the ceremony, speeches were also made by the chairwoman of the local executive committee Janna Demitrieva, the Local Chief of Ideology Vadim Riscoff, the head of Molyatichi Village council Elena Ivanova, guests of the Kirchev region including Michael Lazarus, founder of the Lazarus Foundation and Stanislav Demitrochenko a student of a local school who read a poem by Andrey Dememtev “Ballad of a Soldier”. Those assembled that day at the memorial listened to the very touching words of this poem about a mother’s futile wait for her son to come back from war.

A local resident Lena Cobozova told the story about one of the residents of Molyatichi who was honored as a righteous gentile for saving three Jewish girls who were able to escape from the Nazis. One of them, Yelena Feigina applied at the Yad Vashem institute to nominate her for the righteous gentile designation. Fekla Veselina-Tkacheva who risked her own life to save these Jews was awarded this honorary designation. Her name was placed on the Path of the Righteous Gentiles in Yad Vashem. Her daughter Tamara Grigorevna Lavrenova spoke at the ceremony and people were listening to her with great interest. Janna Demitrieva said that memorials cannot speak, because of that people must speak for the people of the Krichev region who perished during WWII. In the museum of our city, there is an exhibit dedicated to WWII. In the Kirchev area there are about 35 military burial places, and 20 memorial sites dedicated to the defenders of the fatherland. On the day that Kirchev was liberated from the Fascists and on the day of the liberation of the People of Belarus, citizens bring flowers and honor the heroes and victims of WWII. Witnesses of WWII who are still alive retell the stories of the heroes and victims of the war. WWII affected every citizen of Belarus. Many people were killed at the front, murdered in concentration camps, died from wounds and illnesses from and after the war. The representative of the local authorities expressed gratitude toward people who gave money, designed and erected the memorial. This is our common memory and it is holy. At the end of the ceremony there was another prayer for the innocents murdered by the Nazis. 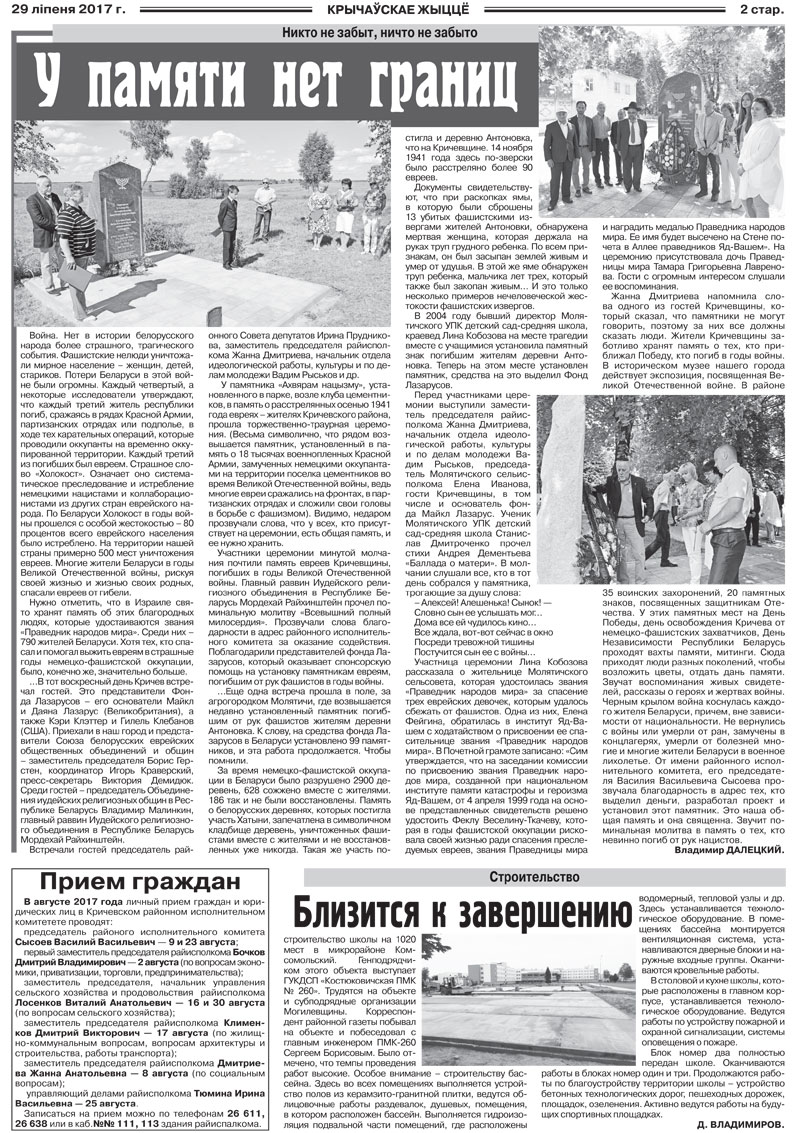