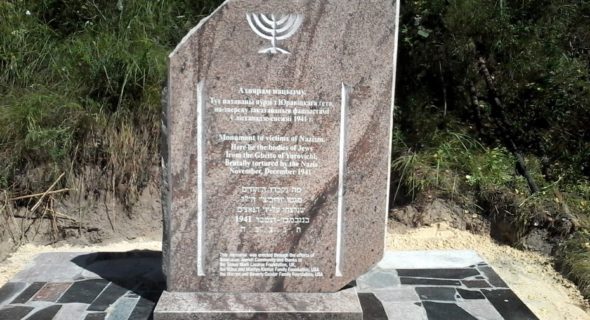 Leonid T., born in 1935 , remembers : «At around midday, the local policemen passed in the village and chased away the Jews from their houses to gather them in the main street of the village. The policemen were wearing civilian clothes and had rifles. They walked in the street and shouted at the Jews that it was necessary to get out houses. The Jews took small bags with them and were finally gathered on the main square of the village. With my friends, we then followed the column which set off towards the ravine behind the village. But the policemen chased us away. We just heard the shooting.» (Witness N°870, interviewed in Yurovichi, on September 28, 2014)

Yurovichi is a village situated 20 km south east of Mozyr. Prior to war, about 46% of total population was Jewish. A Jewish elementary school was opened in 1922. Before the war, around 2/3 of the Jews were artisans. Also, during the thirties, two Jewish kolkhozes held around 50 Jewish families. Lots of refugees went to settle in the village before the German conquest at the end of August 1941.

Holocaust by bullets in figures

Until October 1941, the Jews were allowed to live in their own houses but sometimes they had to perform forced labor. An opened ghetto was established in mid- October 1941, or possibly September 1941 according to  different sources, at the end of Podgornaya Street. Compared to the size of the place, there was also a large number of local policemen who set up in the village.

A first aktion took place on November 19, 1941, carried out by a German punitive detachment coming from Kalinkovichi and helped by the local police. That day, around 250 Jews were shot along the Pripiat river, and the corpses of the dead people were left lying next to the river for several days before being buried on the spot. Some Jews tried to escape by jumping into the river but they were also shot. With the help of local policemen, a punitive detachment carried out a second aktion a few days later, on November 27, 1941, when about 200 Jews, men, women and children were rounded up from their houses and driven to a ravine on the outskirts of the village. The people were lined up on the edge of a large ditch and shot.

During the next days, the police searched for any hidden Jews and they shot them in the ravine, during a third aktion organized in the beginning of December 1941 according to historian Botvinnik.

After the liberation, according to local witnesses interviewed by Yahad, a public hanging of local policemen was organized on the main square by the Soviet authorities.