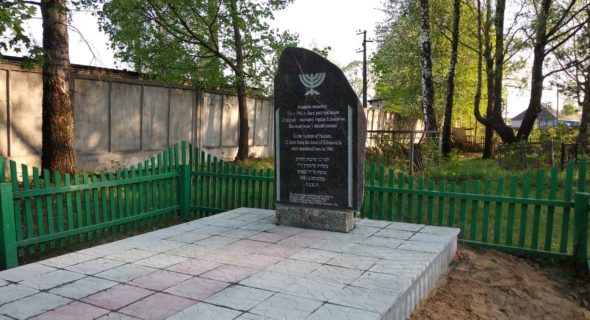 The Jewish community in Klimovichi dates back to the eighteenth century. During the Soviet period, a Yiddish school operated in the town until it was closed in 1938. In January 1939, 1,693 Jews lived in Klimovichi, accounting for 18 percent of the total population. With the beginning of World War II, some Jewish refugees from Poland came to Klimovichi and spoke about Nazi atrocities. When the German army invaded the USSR in June 1941, they were first to leave for the Soviet hinterland.

The Germans occupied Klimovichi on August 10, 1941. Only some of Klimovichi’s Jews managed to evacuate. The Germans ordered the Jews in the town to mark their clothes and houses with a Star of David and to pay a ransom. A Jewish Council was established with eleven members. The Jews of Klimovichi and nearby localities were shot in a number of murder operations between November 1941 and the spring of 1943.

The Red Army liberated Klimovichi on September 28, 1943. Only fifteen of Klimovichi’s Jews survived the German occupation.

—“The Untold Stories, The Murder of the Jews in the Occupied Territories of the Former USSR”, Yad Vashem Website

Region:
Mogilev
Date of Installation:
2018
Number of Jews Who Perished:
12
Date of Massacre:
1941