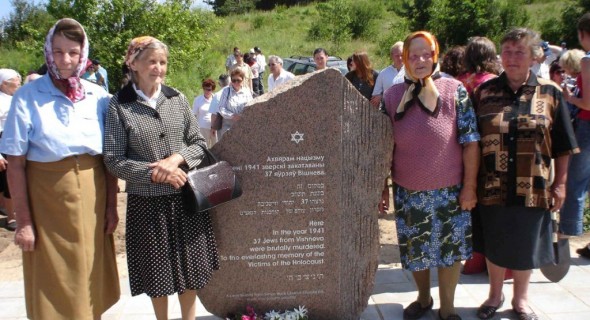 In June 1941 the Germans invaded the Soviet Union and within a few days the Nazis occupied Vishnevo. Many Jews were killed while trying to escape from the Nazis. When the Germans entered the town the Jewish men were rounded up, were held in the synagogue buildings and were then sent to perform forced labor. Local gentiles were forbidden to assist the Jews in any way. The Germans appointed a local militia who assisted the Gestapo in ‘dealing’ with the Jews. Many Jews were killed and others were beaten up without reason. The area around the synagogue was made into a ghetto and the Jews, now numbering about 1,000 people, were forced to move in. Conditions within the ghetto were miserable. The Nazis appointed a Judenrat which was responsible for carrying out their orders. The Judenrat faced constant demands to make large payments under a variety of pretexts. Whenever these payments were not made on time Judenrat members were brought to the Market Square to be humiliated.

On the night of 30th August 1942 (17th Elul 5702) the ghetto was surrounded by German soldiers. At dawn the following morning the Jews were ordered to assemble in the synagogue courtyard. The sick, who were unable to come to the assembly point, were shot dead in their beds. The remainder were split into small groups and put on trucks which drove them to the end of the ghetto street. There they were made to kneel facing the wall of a derelict building, shot in the back and then thrown into the building. Not all were killed outright, their screams were heard by the remainder who proceeded to jump off the trucks and tried to escape to the forests outside the town. Almost all were caught and shot dead. Their bodies were strewn over the entire area. The dead were burned in the derelict building.

The day of the massacre was a Sunday. It seems that just a few dozen Jews survived the massacre. A handful of gentile residents of the town risked their lives to help the Jews either by passing food to them in the ghetto or by hiding Jews in their homes. Partisans, including a number of the Jews who had made good their escape, returned to the now semi-deserted town some weeks later. A carpentry workshop had been set up in the synagogue.

The Jewish escapees from Vishnevo had mostly joined up with a company of Russians partisans.

In 1944 the territory was liberated and just 18 Jews were found in Vishnevo. They emigrated either to Palestine or the USA very soon thereafter. Partisans who later visited Vishnevo dug a mass grave for the Jews who had been killed there and erected a tomb stone as a memorial. In 1980 the Soviets erected a memorial to the victims of the Holocaust in the town but the communist memorial makes no mention of the massacre of the Jews in the town.

In the summer of 1990 the Jewish cemetery of Vishnevo was discovered at the outskirts of the town. The place was almost totally overgrown with trees and vegetation. Only the tops of a few gravestones were visible.

Among the rabbis who served the Jews of Vishnevo was the famous Rabbi Meir Marim Shafit, a renowned scholar, who lived in the town until 1849. Rabbi Ephraim Perlman-Margalit was the town rabbi from the last years of the 19th century until 1920 when he emigrated to Eretz Israel. Rabbi Zundel Lurie served until his death in 1924. He was followed by more modern Rabbi Zvi Ephron. Rabbi Ephron however also decided to immigrate to Eretz Israel in 1927 to be appointed as rabbi in Rehovot. After some time he returned to Poland and perished in the Holocaust. The last rabbi of Vishnevo was Rabbi Itzhak Weinstein: he went to Eretz Israel in 1939 shortly before the outbreak of World War II.

Shimon Peres, who was destined to become Prime Minister and President of the State of Israel, was born in Vishnevo and immigrated to Palestine in 1934. In 1992, as foreign minister of Israel, Peres visited the town of his birth and located the house in which he had lived.

Isser Yehuda Unterman (Hebrew: איסר יהודה אונטרמן, 19 April 1886 – 26 January 1976) was the Ashkenazi Chief Rabbi of Israel from 1964 until 1972.[1]Isser Yehuda Unterman was born in Brest-Litovsk, now Belarus. He studied at the Etz Chaim Yeshiva in Maltsch under Rabbi Shimon Shkop. He founded his own yeshiva in the town of Vishnyeva around 1910. Unterman served a variety of roles in the Lithuanian Jewish community until 1924, when he was selected to become the head rabbi of Liverpool. Unterman served in Liverpool for 22 years, becoming an important figure in the English Zionist movement and working to relieve the suffering of refugees in England during the Second World War.[1]

In 1946, Unterman became the Chief Rabbi of Tel Aviv, a position he held for twenty years before being appointed Chief Rabbi of Israel. As Chief Rabbi, Unterman worked to reform the rabbinic court system and reach out to secular Israelis. He also wrote opinions on a variety of religious issues relevant to the young Jewish state, such as religious conversion and marriage law.[1]

He founded two advanced Talmudical academies (kollels), one in Tel Aviv and one in Jerusalem, designed to prepare select students for the rabbinate and educational positions, with an emphasis on systematic study of Talmud and practical halakhah.[2]