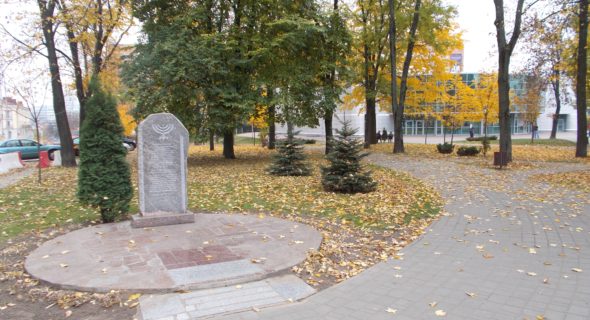 During the 16th century, Jews began to settle in Minsk. During the Chmielnicki revolt and the Russo-Polish war which followed it, the Jews of Minsk were among those who suffered. In 1679 King John III Sobieski of Poland confirmed their right to the ownership of houses and shops, their synagogue and cemetery, and restated their freedom to engage in commerce and crafts and their exemption from all jurisdiction excepting that of the king. These rights were confirmed in their entirety by King Augustus II in 1722.

Hence the community of Minsk prospered during the 17th and 18th centuries in spite of the opposition of the townspeople. In 1766, 1,322 Jewish poll tax payers were registered in Minsk. In 1685 a Yeshivah was established by the local rabbi, Moses Mordecai. In the framework of the councils of the lands, Minsk was subordinated to Brest-Litovsk (Brisk) in 1623, but by 1631 Minsk and its surrounding district was considered a separate province. In 1926, there were 53,836 Jews in Minsk (40.8% of the population).

In Czarist Russia, the district of Minsk was one of the “western” districts of the Pale of Settlement. In 1797 its gubernator presented Czar Paul I with the resolutions of the meetings of the district noblemen, who alleged that the Jews were responsible for the sorry plight of the peasants of the district and for the famine which then raged. This statement was the forerunner of the program to expel the Jews from the villages, which later took the form of the “Jewish Statute” of 1804.

During the 19th century Minsk was one of the largest and most important communities in Russia. In 1847 the Jewish population numbered 12,976, rising to 47,562 (52.3% of the total population) in 1897, which made Minsk the fourth largest community in the Pale of Settlement. Mitnaggedim were influential in Minsk, and Chasidism was relatively weak. There were several yeshivot in the town, the largest of which was known as “Blume’s Kloyz”. A circle of “Maskilim” also existed in the town, and in the 1840s several Jewish schools which included secular subjects in their curricula were opened there. Minsk was one of the places where the Jewish labor movement originated and developed. In the mid- 1870s circles of Jewish socialists were organized, which were very active during the 1880s and 1890s. The years 1893-1894 also saw the birth of the “national opposition” to them, led by A. Liessin. In 1895 a convention of Jewish socialists was held in Minsk, which discussed the projected establishment of a Jewish socialist federation.

The Jewish socialists of Minsk sent delegates to the founding convention of the Bund in 1897, and Minsk became one of the centers of the Bund’s activities, being the first seat of the movement’s central committee until 1898, when it was dispersed by the police. From 1901 to 1903, Minsk likewise became the center of the activities of the independent Jewish workers’ party. Jews were predominant in the demonstrations and revolutionary meetings held in the town in 1905 and were also the principal victims of the riots directed against liberal elements in general which took place in October 1905. Groups of “Chovevei Zion” were first organized in Minsk in the early 1880s. In 1882 the “Kibbutz Niddechei Israel” association was founded there, and in 1890 the “Agudat ha-Elef”. In 1902, with the authorization of the government, the second convention of Russian Zionists was held in Minsk.

After the establishment of the Soviet regime, Jewish communal and religious life was silenced at Minsk as elsewhere in the Soviet Union. The suppressed religious and national institutions were replaced by institutions of Jewish culture based on the Yiddish language and communist ideology, and Minsk became an important center of Jewish-communist cultural activity in the Soviet Union. Yiddish schools were established, and at the institute of Belorussian culture, founded in 1924, a Jewish section was organized. A Jewish department was also established (1921) within the faculty of education of the University of Minsk.

These institutions, however, were closed down in the mid- 1930s. Various newspapers, periodicals, and other publications in Yiddish were issued in the town.

It is estimated that the Jewish population of Minsk at the outbreak of the German-Soviet war (June 1941) numbered about 90,000 (around 37% of the total). Immediately following the occupation of Minsk, the German city commandant ordered all males between the ages of 15 and 45 to report for registration under the penalty of death.

About 40,000 reported, and all Jewish members of the intelligentsia were machine-gunned. On the same day the city commandant issued an ordinance for the establishment of a ghetto in a suburb consisting mostly of wooden cottages, and ordered every Jew to wear the yellow badge. All Jews had to be inside the ghetto by July 25, but the Judenrat managed to delay the date until the middle of August by means of bribes. As there were no Jewish communal organizations to provide the Germans with officials to carry out their orders, a group of Jews was arrested. One of them, Ilya Mushkin, who knew a little German, was appointed head of a Judenrat and ordered to select the other officials. Once inside the ghetto, the Jews were terrorized by nightly murders and kidnappings.

On the nights of August 14, 25, and 31, thousands were taken away and only a few appeared in the dreaded “labor” camp on Shirokaya street, where in addition to Jews the Germans held non-Jewish Red Army men. On Nov. 7, 1941, 12,000 Jews were seized and taken to Tuchinka, where they were machine-gunned at the side of the newly dug pits. By means of barbed wire fences, the ghetto was henceforth divided into three for “skilled” workers and Judenrat employees, including the ghetto police; and a section housing the German, Austrian, and Czech Jews. At the end of February 1942, the Gestapo asked the Judenrat to turn over 5,000 Jews not employed in Wehrmacht enterprises. The resistance leaders ordered Serebryanskiy, the chief of the ghetto police and a member of the resistance organization, to use his trustworthy policemen to warn the Jews of the impending massacre and tell them to hide. On March 1 the Germans ordered the Judenrat to dig a pit in Ratomskaya street, an unpaved ravine in the center of the ghetto. On the following morning, after the columns of workers had left the ghetto, Nazi officials arrived and demanded the 5,000 victims. Informed that the Judenrat had been unable to collect them, the Germans began a hunt for their victims. Dr. Chernis, the woman in charge of the ghetto orphanage, and Fleysher, the supervisor, were ordered to bring their charges in front of the Judenrat building. Unaware of what awaited their children, they led them, dressed and washed, and carrying the youngest in their arms, toward the building, but when they arrived in Ratomskaya street they were all thrown into the pit and buried alive. When the columns of workers returned at night, several thousand were taken to Koidanovo and murdered there. Others were forced to join the people rounded up inside the ghetto and butchered in the Ratomskaya street ravine. On the night of March 31, 1942, the Gestapo raided the ghetto and arrested several resistance leaders, but failed to capture the head of the resistance, Hersh Smolar.

On July 28, 1942, after the labor columns left the ghetto, the Germans and their local collaborators invaded the ghetto and for three days murdered and tortured the inhabitants. Some 10,000 were murdered; 9,000 Jews still survived.

The resistance record of the Jews imprisoned in Minsk ghetto is unique. Four resistance groups arose in the “Aryan” part of the city in August and September 1941.

However, it was only after the November 7 massacre that Hersh Smolar, the Polish-born leader of the Jewish resistance, met Isai Pavlovich Kozinets, known as Slavek, the leader of one of the four groups, who subsequently became the leader of the entire underground movement in Minsk. The underground organization inside the ghetto then became an integral part of the city underground. The Judenrat took orders from the city-underground committee and played a unique part in diverting much of the production from the workshops and factories manned by Jews to the needs of the partisans. The Jewish organization provided the city underground with news of what was happening in the outside world by establishing a radio monitoring station. It also supplied a printing press and printers, while the ghetto hospital provided surgical and other treatment for wounded partisans. Many Jews escaped with the help of the railwaymen’s resistance group headed by Kuznetsov; they formed a large proportion of the Narodny Mstitel (“people’s avenger”) Brigade, which Kuznetsov later commanded. The Jews of Minsk created the 406, Kutuzov, Budyonny, Dzerzhinskiy, Sergei Lazo, and Parkhomenko detachments, as well as the 106 family detachment, which provided protection in the forests for over 600 Jewish women and children. Altogether some 10,000 Minsk Jews succeeded in escaping from the Minsk ghetto – a proportion without parallel in the history of the city ghettos of Poland and the occupied territories of the Soviet Union. Of those who escaped, perhaps no more than half survived the war.

A memorial to the Jewish victims of the Holocaust was erected in Minsk immediately after World War II – the only one in the U.S.S.R. – bearing a Yiddish inscription which explicitly mentions Jewish victims. In the 1959 census 38,842 Jews were registered in Minsk, 5,716 of whom declared Yiddish to be their mother tongue. The great synagogue of Minsk was closed down by the authorities in 1959. Eventually the Jewish congregation was allowed to open a small synagogue in a wooden house on the outskirts of the city. There is no Jewish cemetery in Minsk. In 1968 several thousand young Jews were arrested for Zionist activity.

—From Museum of the Jewish People at Beit Hatfutsot