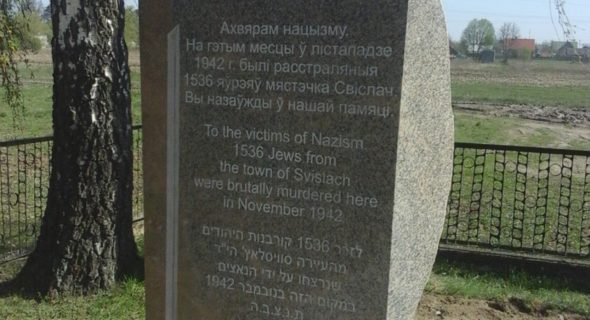 In 1927, Rabbi Chaim Yaakov Mishkinsky, whose wife Chaya was the granddaughter of Rabbi Naftali Hertz Halperin of Bialystock, was appointed the rabbi of Svislach. He led the community until the Nazis entered in November 1942 murdering the entire Jewish community. Prior to the war, Rabbi Mishkinsky sent his sons Yitzchak and Moshe to Israel. Rabbi Mishkinsky’s great-granddaughter, Batya Friedman, serves as rebbetzin of Beth Israel Synagogue (Edmonton), Canada. His great-grandson is Rabbi Yochanan Ivry of Congregation Toras Emes of Staten Island, New York.

In 1939, there were around 3,000 Jews living in Svisloch, along with refugees from western Poland who had settled there after the invasion of Poland. In July 1941, a ghetto was established in the old Jewish neighborhood, in the northwest of Svislach. In that area, Jews were also gathered from the village of Golobudy. It was an open ghetto, and the western border of the ghetto’s territory ran near the Svislach River. On November 2, 1942, the ghetto was liquidated when the Jews were sent by train to the Vawkavysk transit camp where many massacres occurred. The remaining Jews, mostly elderly and sick, were killed in the Visnik Forest, just outside Svislach.