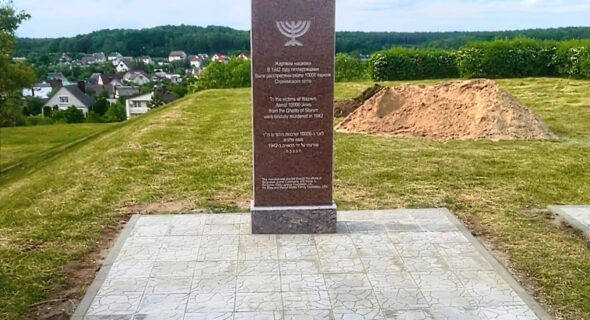 The memorial sign was erected on the Petralevichi mountain, near the village of Petralevichi. In June–July 1942, the Nazis began to exterminate the Jews of the Slonim ghetto. The territory of the ghetto was cordoned off by policemen and gendarmes, people were driven out of their houses, undressed, loaded onto cars and taken to the Petralevichi Hill where they were mocked and shot. In total, about 10,000 Jews were shot at that place in two months. There are two more monuments on this mountain and one of them is in memory of the Catholic priests who hid and saved the Jews. The other is in memory of the fallen soldiers who liberated Slonim.