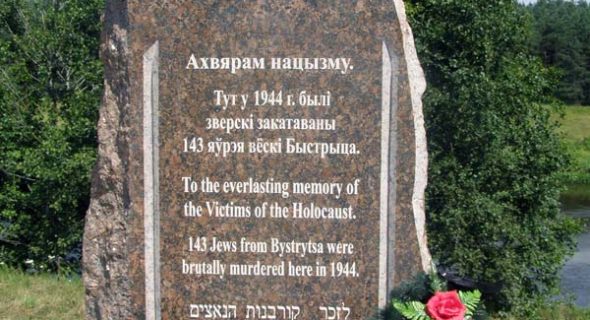 The first Jews settled in the village of Bystrzyca in the last decades of the 19th century; their main occupation was agriculture. In 1919 23 Jewish families resided in Bystrzyca. In 1921, the area was annexed to Poland.

With the beginning of World War II, in September 1939 Bystrzyca and the vicinity were occupied by the Red Army and its became part of the Belorussian SSR. On June 24, 194, the village was occupied by the Wehrmacht. The German occupiers issued a number of anti-Jewish decrees and orders: Jews were prohibited from leaving the village and from using the sidewalks; they were required to wear a yellow patch. Jewish property, first and foremost all Jewish agricultural lands, was seized by the Nazis. A ghetto was established. The forced labor that was introduced for Jews, included agricultural work: the Jews had to work on plots of land that had previously belonged to them. Groups of able-bodied Jews were sent to labor camps in Belorussia and Lithuania in 1941-1942.

In 1941 (the exact date is uncertain), about 100 people were shot by the Germans at the sand quarry 200 meters east of the village, near the bank of the Viliia River. It is unclear whether all the victims were Jewish, but at least 21 names of Jewish victims of this murder have been ascertained.

According to the census conducted by the Germans in May 1942, there were 194 Jews in the Bystrzyca ghetto at this time. On October 24, 1942 the Germans liquidated the ghetto of Bystrzyca, shooting 143 inmates. Some sources report that the last murder of Bystrzyca Jews took place in 1942, while others cite 1944, some months before the liberation of the village. The latter is unlikely.