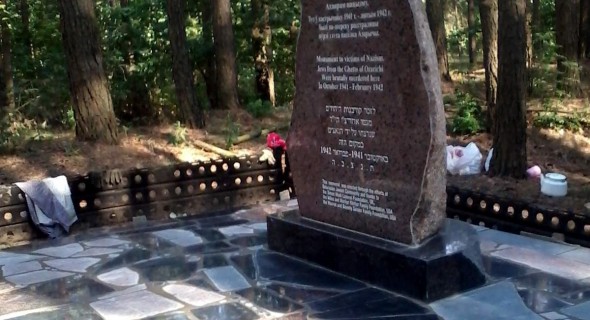 The village had an important Jewish community. In 1939 there were 1,059 Jews counted in a census. After the Germans arrived, the Jews were moved into a ghetto, and forced to wear yellow stars. On March 3, 1942 all the Jews remaining in the town were murdered. Germans occupied the town from November 1941 to January 1944 and built 3 Belarussian civilian camps. The people in the camps were placed there to protect the retreating German army from advancing an Soviet army (65th Army of the 1st Belarussian Front). The camps were filled with disabled adults and children, many of whom were suffering from Typhus. The persons placed in these camps were rounded up by Sonderkommando 7 of Einsatzgruppen B (mobile killing units) from Gomel, Mogilev and other areas. Nazi General Richtert was tried and executed in Minsk in 1946 for his crimes against civilians in Ozarichi. Between 9,000 and 13,000 of the up to 50,000 imprisoned Belarusian and Russian men, women and children did not survive their incarceration at the camps.