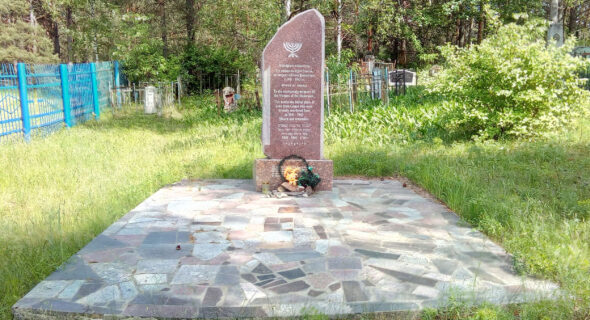 In 1897 there were 20,385 Jews in Gomel (56.4% of the total population). It had 30 synagogues, including the Great synagogue built by Count Rumyantsev in the middle of the 19th century. While a few wealthy Jews in Gomel traded in forest products or were government contractors, many thousands of poor families lived in the “rov,” the valley described by J. Ch. Brenner in Me-emek Akhor (1900).

Toward the end of the 19th century a Jewish revolutionary movement, centered on the Bund, developed in Gomel. Zionism also gained many adherents there and several Hebrew schools were established. Zionists from Gomel settled in Israel and participated in the building of haderah; many were pioneers of the second and third aliyah.

In 1903 there was a pogrom in Gomel. A self defense group was organized under the command of Yehezkel Henkin in which the Jewish political parties participated. Here is an account of the 1903 pogrom from the Jewish Encyclopedia:

Anti-Jewish outbreaks occurred in Gomel in Sept., 1903. On Monday, Sept. 14, about 100 railway employees gathered and began to break the windows and to enter and plunder the houses of the Jews in the poorest quarters of the town, one of which is called “Novaya Amerika” (“New America”). The total number of Jews killed is given as 25; seriously injured, 100; slightly injured, 200. Three hundred and seventy-two Jewish houses and 200 stores were plundered and destroyed. About one-third of the Jewish population escaped. While the chief of police and other Christians gave shelter to some of the victims, several of the merchants took part in the riots.

Thirty six members of the Jewish self defense group were prosecuted by the authorities, along with the perpetrators of the pogroms, and charged with committing pogroms against the Russian populations.  In the end 12 non-Jews and 18 Jews were given 1 year of penal servitude and the court petitioned the Tsar to reduce their sentences. During World War I thousands of refugees from the war zone took refuge in Gomel and several yeshivot moved there from Poland and Lithuania.

Soon after the October revolution in 1917, Gomel was closed to all haderim and the synagogues and prayer houses were gradually transformed into clubs and cinemas. The rabbi of Gomel, R. Borishanski, was arrested for opposing the communist suppression of the jewish religion.  The community decreased from 47,505 in 1910 (55%) to 37,475 in 1926 (44%). A significant part of the Jewish population worked in cottage industries as well as in factories as engineers and production managers. Most of the city’s artisans were Jews. Among the Jewish working population in 1926, 3,482 were factory workers, 4,057 were white-collar workers, 3,235 artisans, and 5,046 worked the land. In 1930 there were eight Jewish kolkhozes near the city, where 1,889 Jews (400 families) farmed 21,000 acres of land. In the 1920s, 6 Yiddish schools and two kindergartens were in operation. There was also a Yiddish teachers college, but it was moved to Smolensk in 1929.

In 1939, the Jewish population in Gomel was 40,880 (29% of the total). In the beginning of the German-Soviet war many Jews succeeded in escaping into the Soviet interior. The Germans entered the city on August 19th, 1941. The Jews were concentrated in four ghettos under conditions of overcrowding, starvation and disease. Three labor camps housing 1,500 Jews were set up in the city. In October 1941, 2,365 Jews were murdered. By December 1941, 4,000 had been killed. Woman and children were gassed in vans. In the following months the Germans proceeded to murder the remaining Jews. Near the city is a memorial to the victims of the Nazis, but without reference to their nationality.

After the war, Jews returned to Gomel although none of the Yiddish-speaking institutions were restored. A petition requesting the return of the synagogue building to the Jewish community was rejected by the authorities. In 1947, religious Jews collected enough money to obtain a private house for use as a synagogue, but the authorities confiscated it and forbade prayer assemblies. In 1963, the militia attacked a private prayer group, dispersed them during their service and removed two Torah scrolls and other religious accessories.

Due to its closeness to Chernobyl, Gomel was one of the places most affected by the nuclear disaster on April 26, 1986.

The restoration of Jewish life in Gomel began at the end of the 1980’s. Since 2006, Beit Yaakov, the one functioning synagogue in Gomel, has held regular prayer services and organizes several programs for the Jewish community of Gomel.