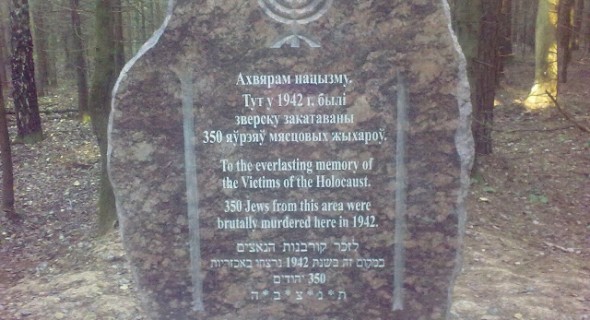 The first reference to Jews living in the village relates to the mid-17th century. In 1921 Polonka’s 206 Jews comprised about 50 percent of the total population. In September 1939, following the Ribbentrop-Molotov Pact and the German invasion of Poland, the Nowogrodek District was absorbed into the Soviet Union.

The German army occupied Polonka on June 26, 1941 and immediately began to loot Jewish property and abuse the Jews, with the help of the local population. Several weeks later, a Judenrat was established; its main functions were to collect ransom payments and to mobilize forced laborers for the Germans. The Jews were required to wear a yellow badge and their freedom of movement was restricted. During the first few months of the occupation the Germans murdered a number of Polonka’s Jews, including several entire families. A few months later a ghetto was established in Polonka. On April 18, 1942, elderly Jews and children were murdered outside of town. In June 1942 local farmers were forced to dig a deep pit. When news of this reached the inhabitants of the ghetto, a group of Jewish youths called on the members of the community to flee, but they encountered adamant opposition. On August 12, 1942 the Jews of Polonka were shot to death outside of Polonka. Only a few of them managed to escape.

The Red Army liberated Polonka in the summer of 1944.

Region:
Brest
Date of Installation:
2011
Number of Jews Who Perished:
350