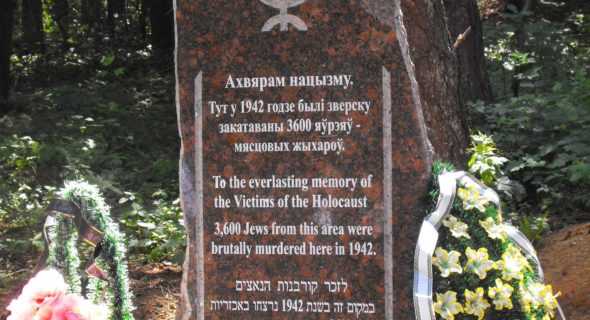 The Rise and Fall of Maytchet

I received a request from the memorial committee to contribute memories of my hometown, Maytchet. I was lucky to survive the slaughter and to arrive on a safe shore in my beloved land. But I will never forget those who didn’t survive, and even if it opens wounds, I will return and relive the most horrible period that I lived. I must tell what the Nazis and their local allies had done to us. After generations of peaceful coexistence, in difficult times they betrayed us and helped our enemy destroy us.

In Maytchet, a small village, as like the other villages in the region, the Jewish inhabitants worked in various occupations, and so did our family. I remember from my childhood our grocery store. Most of the clients were rural farmers, and we especially looked forward to the sale days of Wednesday and Thursday. On Wednesday the weekly market day took place, in it the local farmers came to sell their products and buy their needs. On Thursdays it was the local Jews who bought things for the Sabbath.

I still remember the brick-kiln (zigalne in Yiddish) that my father was partners with Rabbi Joshua-Aharon Lozovsky, Rabbi Hiekel Israelevitz, and a local gentile named Tashuma, who managed a grocery in the village. Farmers of the neighborhood worked in the brick-kiln in a very primitive way. They took the bitumen and worked the material they put into molds and put it into an oven that was fueled by wood. This oven had a wooden roof, and because of negligent care of the vents, there was a great fire in 1927. The roof and the entire structure was burnt in the fire.

In our house, as in every Jewish house in the village, there was a cow that provided milk and other milk products for our needs. We also had a horse and wagon. Every summer we would rent a piece of land to sow crops such as potatoes. After Passover we cleaned the manure from the cowshed and stable and brought it to the land we rented to use as fertilizer. My father ploughed the land and all the children and neighbors helped to sow the potatoes. Before Rosh Hashana the local farmwomen came to dig the potatoes. The children sorted them and filled the bags to carry home. While we were working, we would roast potatoes in the field to eat and have fun.

During the time, when my elder brother Jacob had grown up, he helped our father sell the crops, which they bought mainly from the crop traders in our village, and took it to sell at Baranovichi. On their way back they brought different merchandise for the village grocers. In the early thirties we closed the grocery store and built a fast food cafeteria mainly for the neighboring farmers. The whole family worked at the restaurant, at crop trade, and to supply merchandise for the grocers. We were all busy with work.

As time passed and I grew up, we became partners in the textile store with Berel Shmulovits, and I was appointed to run this store. Our family consisted of dad, mom, five brothers and two sisters, and each had their share of different work to support the family. But when the children were grown, each went their own way. The business became slow; only the restaurant and the textile store remained. My brother Jacob was drafted into the Polish army, my brother Nachum went to train to live in a Kibbutz and be prepared for Aliya (immigration to Israel), my brother Moshe studied in high school at Baranovichi, and the rest of the children remained at home. And so we arrive at September 1, 1939 – the day WW II began.

According to the Ribenthrop-Molotov Pact, Maytchet fell under Russian occupation. Immediately when the Red army entered the village, it brought in the Soviet regime and the whole economic life that prevailed until it was abolished. The stores were empty of goods, some of it sold with no possibilty to renew it, and part of it was hidden not knowing what the future would bring. We were forced to trade with material to buy food. Life became hard, but slowly we managed by taking new jobs in the larger city of Baranovichi and started to adjust to our new life until the German and Russia war broke out in June of 1941.

The treacherous German attack on its former ally developed into a blitzkrieg and before anyone could pull them selves together from this situation, the Nazis entered the village and the troubles began. A police force was established from the local gentiles and also a “Yudenrat” (Jewish committee similar to a town council) was established, and the infamous German order before elimination was in place in the village with all it’s might. Before long the Germans gathered two hundred boys and girls and sent on the pretext to work in the village of Burdykovschina. When they arrived there they all were shot down and killed, among them my brother Moshe and my cousin Chana Mare Orzechovsky. A few months later another few hundred youngsters were selected to be sent to a labor camp in Baranovichi – among them my brother Abba and my husband David Rabets whom I had recently married. My young sister Chasha and I were left to live in my flat at the Rabets’s house, and my parents with my brothers Jacob and Mordechai lived at their apartment, which was located in the house of Nechama Yatvicky.

So the days went on, the weeks and the months. From the neighborhood we heard rumors about ghettos, tortures and murders. But since there was no ghetto in Maytchet, the dreary life went on some how, and we prepared ourselves for any trouble that might come. With bribes the people succeeded in postponing the end and meanwhile they established a self-defense that included army veterans who organized it.

For their disposal were several old guns, that were hidden with Hayim Shelubsky, and they also dug a “Sichron” (hideout), to hide in due time. We also built a big “sichron” in our house, which was hard to find, and we waited to see what would happen.

One day an order arrived to the “Yudenrat” to recruit the Jews to dig holes for big fuel containers, that had to be placed at the “Havoinik” (hidden place in the woods) close to the Provoslav cemetary. Among the village Jews the opinions were divided at the meaning of the order. Some said, that these holes were not to be used for petrol tanks, but for burial of the Jews of Maytchet. But in any case they were obliged to dig the holes. A few days before July 1942, we received word that the Germans with the participation of the local farmers, had surrounded the village. The members of the self-defense arose immediately to action. They tried to break through the siege near the pharmacy of Dvorzecky toward the mountains on the way to Slonim, but the Germans opened fire and all the youngsters, twenty in number, were killed in this action, and among them my brother Jacob. One of them survived, Noah Mordkovsky who managed to escape and now lives in the U.S. On Rosh Chodesh Ab (June 1942) many troops surrounded the village and started to lead the Jews to the “Havoinik”. They moved from house to house, search and found hidden places and pulled out their victims to be killed, and so it lasted three days. My parents managed at first to hide in their hiding place, until one gentile, a pig trader, continued to search until he found them and brought them to the holes. My sister Chasha and I and the family of my husband David stayed in our hiding place, as did several others. At night we left the hiding place, crossed the swamp and the railway and ran away to the forests.

After the butchery in Maytchet a few Jews returned from the forests according to a false promise that nothing will happen to them, and of course all of them were caught and killed. Everyone who stayed in their hiding places went to the forest and decided that they will run away and hide separately. And so it was, my sister and I ran to the village of Midzbidzina and arrived at an acquaintance, a gentile named Bezerovski, who let us to hide in his attic. So we lived a few weeks, the gentile brought us food and at nights we even entered his house. To this place we heard the disaster that happened to the Jews of the village and among them all our family: Dad, Mom, brothers Jacob, Moshe, Mordechai, granddad (Asher) my uncles and aunts and their families were all dead. The only ones who survived were my husband David and his nephew Abba, who were in the Baranovichi ghetto. We thought about our situation and, with the consent of our host, we decide to be united. One day Bezerovski took his wagon and drove to Baranovichi to bring back David and Abba to us. They arrived at the Baranovichi ghetto and came to my aunt Rivka Sadovski’s house and met David and Abba who were willing to join us. But since it was a day or two before Yom Kippur they decided to stay in Baranovichi until after Yom Kippur, for then the farmer will return to fetch them to his house. At the first day after Yom Kippur, which was on the Sabbath day the gentile came with his wagon as agreed, but he didn’t find any one there, for at Yom Kippur all the Jews of Baranovichi were killed, among them the rest of our family.

So I stayed alone in the farmer’s house until one day he said, that the fact that I’m staying there was known and the police and the gentiles are looking for me. That night I ran away to the nearest forest and after that I arrived to a farmer named Slavoi and was hidden at his house. One day I met Moshe Rabets and he told me, that in the Sbrotba forests there are around twenty Jews of our village. I started to wonder and search for them, for I was not able to bear the loneliness, and so I arrived finally to their hiding place and met Joshua Rabets, and the family of Moshe Rabets and others. I joined them and lived the hard life. At night we went out to the nearby villages to search food and the farmers gave it willingly. But this uncovered our existence, and one day in the hiding place they attacked us and they killed everybody. Miraculously Sarah Rabets (Kaplan) survived, she was wounded while running away but survived and now lives in the US.

When we heard about the butchery of the people in this hidden place, we felt no security in our hidden place and decided to leave it. At the same night we went away and without knowledge arrived in the Dvorets ghetto. We stayed there only one day and at night we went out very quietly from the ghetto and I continued to wander until I arrived at the village of Zapolia. There I found one farmer that knew our family and he agreed to hide me in his house. I stayed at this gentile’s house in Zapolia for one month until I found out about a partisan organization in the area. I went out to the nearest forest to look for the partisans, and I met them and was accepted at the “Otriad” [partisan group] named after Ivan Grozni. I lived in this place and was active with the group for six months until the liberation in the summer of 1944. 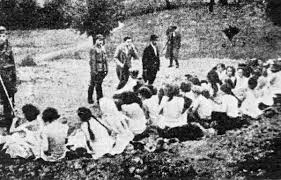